An exciting new exhibition began at Buckingham Palace this weekend. Running through until the 29th of September 2019, the ‘Queen Victoria’s Palace’ exhibition has already had one fascinated viewer. Her Majesty was the first to see the items from the collection which marks the 200th anniversary of the birth of Queen Victoria.
The public are invited to view the exhibits during the summer opening of the State Rooms.

A special feature of the exhibition, housed in the Ballroom, is a hologram recreating a waltz from a ball marking the conclusion of the Crimean War in 1856.
Images of 8 dancers perform a quadrille to La Traviata. This ‘engrossed’ Her Majesty but she joked, “Thank God we don’t have to do that anymore.”
Visitors will also be able to witness a Victorian illusion technique called ‘Pepper’s Ghost’ which will create an immersive experience.

Victoria transformed Buckingham Palace into her vision of a royal residence. Curator, Dr Amanda Foreman, describes Queen Victoria’s changes during her 63-year reign as a ‘feminist transformation’ and significant because ideas implemented by a woman revolutionised the monarchy. The Palace became the home and working entity, that we see today.

The East Gallery introduces the Victorian aspect of Buckingham Palace, linking the new Ballroom and Ball Supper Room with the older features.
Many traditions we see today such as the palace balcony and recognition of citizens at the Royal garden parties were introduced by Victoria.

On May 24th, 1819, at Kensington Palace, the Duke of Kent and Princess Victoire of Saxe-Coburg-Saalfeld welcomed a baby daughter, Princess Alexandrina Victoria, to the world.
When William IV died without an heir, Victoria inherited the throne and on June 28th, 1838 she was crowned Queen. The streets around Westminster Abbey were lined with an estimated 400,000 people. Leaving for the Coronation from Buckingham Palace began with Victoria, the first British monarch to do so. A new imperial State Crown was made for her coronation.
Victoria chose to live at the refurbished Buckingham Palace. The 18-year-old embraced society life and thought it important to bring people into the Palace to celebrate public and national occasions.

Victoria chose to live at the refurbished Buckingham Palace. The 18-year-old embraced society life and thought it important to bring people into the Palace to celebrate public and national occasions.
Although George IV and William IV had made many modernisations the work was unfinished and though the Queen delighted in ‘high, pleasant and cheerful interiors’ she felt the palace unsuitable for Royal life.
To address the problem of entertaining on a large scale, she commissioned the architect James Pennethorne to design a new annexe.
This demonstrated her outgoing personality and her inherent qualities of duty, loyalty and public service – qualities which, when combined with military might, made the country very powerful.

On February 10th, 1840, in the Chapel Royal, Victoria was married to her cousin Prince Albert of Saxe-Coburg and Gotha at St James’s Palace.
In 1857 Victoria conferred the title of Prince Consort on Albert, ensuring her husband had official status and position.
Included in the exhibition is a painting by Sir George Hayter depicting the moment of joining hands. Although he took artistic licence, painting a setting with invented canopy, panelling and door, he did include portraits of 56 guests. The Queen and Prince Albert both posed. Hayter appears in the painting with his pencil and sketchbook.
Loving music, the couple spent much time together singing at the piano. They had a piano in all their private apartments in various homes. The exhibition includes an ornate piano by Erard, craftsmen for the French nobility.

The patter of tiny feet became a stampede as Victoria gave birth to 9 children in 17 years. Her first child, Victoria Adelaide arrived on November 21st, 1840 followed by Albert Edward (King Edward VII) in 1841 and Alice in 1843.
Alfred was born in 1844, then Helena in 1846 and Louise in 1848. Finally, Arthur was born in 1850, Leopold in 1853 and Beatrice in 1857.
Whilst it was no secret that Victoria disliked pregnancy, she was a doting mother. Her journals and sketchbooks demonstrate her affection and she commissioned many souvenirs from her children’s early years

Included in the exhibition are the musical instruments her children played, a gilt-metal casket containing her children’s teeth and marble casts of her children’s limbs.
According to Dr Amanda Foreman, this was, ‘the recognition that childhood is so important – the thing that she felt she never had.’
When the children went on to marry into European royal families and nobility, Victoria was nicknamed the ‘grandmother of Europe’.

Young Victoria painted by Thomas Sully is included in the collection bringing the era to life. One of the most stunning items is a ball gown she wore to the Stuart Ball in 1851, created by Eugene-Louis Lami.
Made of lace, gold braid, seed pearls, silk and silver fringing the magnificent gown was designed to mimic costumes worn 200 years earlier to the court of Charles II. It is without doubt a stand-alone example of glamour from the Queens surviving clothes.

The East Front was added to the Palace including the now famous balcony. For this to happen, the Nash Triumphal Arch needed to be relocated and in 1851 it became the entrance to Hyde Park and became known as the Marble Arch.
The Chinese Drawing Room became a space used often by the family. It contained items from the Royal Pavilion at Brighton and was one of the first renovations completed.
The Ballroom complete with organ, in the newly built south-west block and Ball Supper Room were completed in 1856. The State Dining Room was incomplete when Victoria took residence at the Palace, she quickly remedied this. Prince Albert took a keen interest approving many of the plans. The small, inefficient kitchens were redesigned to cope with the relentless demand of Royal life.

Britain joined France in the war against Russia known as the Crimean war in 1854.
Victoria involved herself with the welfare of the troops sending provisions and inspecting hospitals caring for the wounded.
As Commander-in-Chief of the British Army, the Queen commissioned a red military tunic which she wore and in 1856 instituted the Victoria Cross medal to recognise special bravery – independent of rank. The first ceremony of awards was held in Hyde Park in 1857.
The Crimea Medal was given to all those in the British Army, Navy and Marines who had bravely given their service in the Crimea. Victoria personally distributed 768 medals.

At the beginning of December 1861, Prince Albert was taken ill at Windsor Castle. The frantic Queen sought the treatment of many physicians but sadly the Prince passed away at 42.
The body was interred at Frogmore in the specially constructed mausoleum.
Victoria was heartbroken and entered a sad and long period of mourning. Withdrawing from public life she left Buckingham Palace shuttered, preferring to be at Windsor, Balmoral and Osborne.
Although she returned to duties, Victoria never really recovered. She avoided Buckingham Palace because of the memories and described it in her diary as ‘one of my saddest of sad houses.’
The exhibition includes a marble bust of Prince Albert, by sculptor William Theed. Completed in 1862, the sculpture was placed in the Blue Room at Windsor Castle and remained there until Victoria died.

After a significant amount of encouragement, and gentle pressure from her prime ministers, Victoria made her return to public view by being proclaimed ‘Empress of India’ in 1877 at a grand Durbar and thereby uniting the monarchy and empire.

After a 60-year reign, Queen Victoria took to the streets for a 6-mile procession through London. Troops from across the Empire lined the streets. She was a popular monarch and the day demonstrated the respect of the people and the Empire.

At the age of 81 Queen Victoria passed away.
Albert Edward, Prince of Wales was at her side at Osborne House as was her grandson Emperor Wilhelm II of Germany. After laying in state at Windsor Castle, from there she was interred at Frogmore.
Reunited with her beloved Albert.

Buckingham Palace is now globally famous for being a venue for national celebrations, state occasions and Royal Family life.
Victoria and Albert introduced the balcony and the royal garden party. Today those traditions live on and celebrate this remarkable woman. 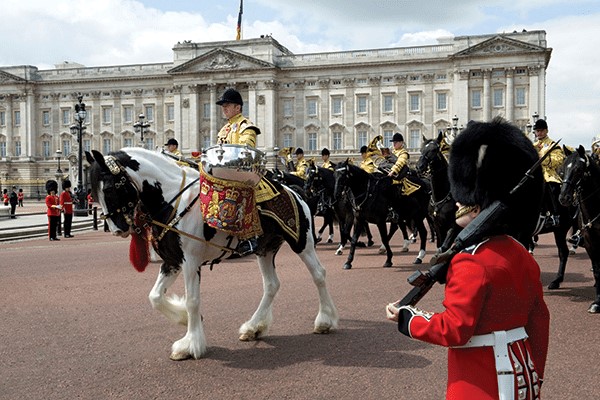 The Changing of the Guard

The traditional ceremony of the old guard changing with the new.